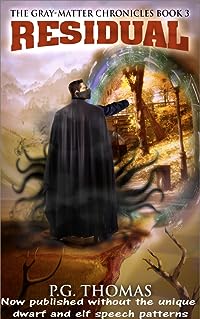 In Book 2, Reset, our heroes Lauren, the distraught mother of the missing triplets, Ryan her husband, Logan her brother, friends John and Eric, including the arresting detective Steve, finally saw what they searched for; one of the triplets. However, it was not a sight any had anticipated, as a man wearing black veils stood in front of a caged beast shocked all—when he announced his plans to put the defenseless baby inside the cage. Then, before they can act, the event ends, leaving them all in shock, but before it had started, Sam and Hope, the shape-shifting children of Zack, had wandered off in an attempt to find the triplets.

Now having a target to focus on, they start to make plans, gathering information on the man in the black veils. As well, they discover ways to rebirth the divine entity of Mother, so after she heals, the help proffered would arrive. While that was the plan, what happens when your opponent is stronger than you are; knows magic, is a fanatic, and is preparing to unleash a force never seen before. What happens when you run out of choices? You try to stack the deck in your favor! It is a simple strategy—if there is only one deck in play and only two players in the game. Although, in the end, when you run out of options because everything has failed—it is time to start kicking in the doors.

This is the conclusion of the fast-paced, suspenseful epic of The Gray-Matter Chronicles, but the sequel is currently in progress, and samples of it are included after the finale.