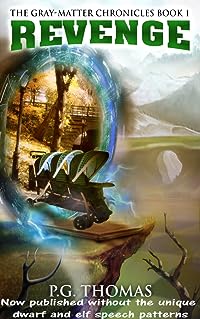 Your children kidnapped—a parent’s worst horror!
Unless you saw them disappear into the portal—then it becomes a nightmare!
You can’t tell the police—as they will never believe you, nobody will.
So what do you do? You pray! And that is what Lauren did after her arrest.

With insufficient evidence and released from jail, those who would believe her gather to provide support: her husband Ryan, her brother Logan, and friends Eric and John, who had all returned from the magical lands of Calicon four years earlier. The place she desperately needed to get back to—because that was where her triplets were presently located.

Just as the abduction had been unanticipated, so was their exit from this world, which also caught Steve, the arresting detective, by surprise. Once in the enchanted lands, greeted by Mirtza, a new plague of mysteries waits for them, but so do magic, friends, and allies. Then, in a land filled with surprises so amazing, it will yield the greatest one yet, and the promise of hope.

Can they formulate a plan to push back the shadows: to find the triplets, to win the day? What happens when the evil unleashed is great, and it has a plan—a better plan? What happens when chaos threatens to birth horrors unimaginable? This fast-paced, suspenseful epic is filled with twists and turns that will both surprise and entertain you like no book before.

When done, your introduction to The Gray-Matter Chronicles continues with Book two, Reset, which has also been published for your enjoyment.

• “I feel the characters evolved from the earlier volumes in a logical progression.”
• “The new characters were great additions and provided a good contrast and at times a foil to the heroes. Challenging, questioning and driving the plot forward. ”
• “Book was well paced - I liked the build up at the end.”
• “Great sequel - I think your writing is developing well. Your POV is better and the characters are able to have complex discussion without the reader losing the plot line. ”
• “The plot is unique and draws the reader in.”
• “Overall great book - thanks for letting me read it.”
• “This book was a "Wow!" for most of it. Thank you. ”
• “Yes. All the characters stayed true to what I knew and what I expected. ”
• “…I laughed and was saddened several times…”
• “Yes, you made the end chapters intense. So much so that I forgot this was a beta book and went to Amazon to see if there was a second book. During the end chapters my husband had to get up in the middle of the night to ask if I planned to go to bed. I told him that I'd wait to finish the book. ”