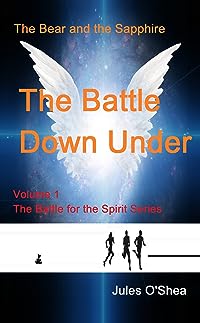 One summer William and Jessica have a taste of freedom in the city while their parents go away to work in the Amazon rain forest. Weird things start happening when there is a freaky lightning storm when they are skating with their friend Richard. Things get freakier when Jessica gets an ugly knitted bear with an unusual glint in its blue eyes. The boys laugh at the ugly bear but Jessica thinks Ted has a special way of reaching people. Then strange men steal Ted. Why would a gang of thieves steal an ugly bear like Ted? Jessica, William and Richard chase the thieves and are attacked by dark demons. A battle begins and it looks as though the demons will win. How can human children stand against dark forces from the spirit world? Can angels help? Who can unlock a power strong enough to fight the demons?