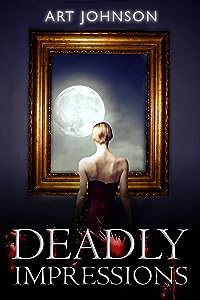 FBI special Agent Chris Clarke and his partner Carlos Chubbs Gonzales are off to Los Angeles to investigate the kidnapping of a twenty-four year old heiress. Her grandfather, multi-billionaire Ezekiel Fick, who has the President of the United States on speed-dial, cracks the whip over the Mayor of Los Angeles, which puts L.A. Police Chief Fergus McCreary on the hot seat to find Stephanie Fick--and fast.

After organizing the departmental investigation, Chief Mac goes behind closed doors to call in Arnold Blackburn, an ex-LAPD Lieutenant recently booted off the force who is now a Private Detective in L.A. County. Arney Blackburn has respect from both sides of the law which gives him access to information the LAPD isn’t privy to.

But her abductors won’t follow the rule book. A week goes by and yet no ransom is demanded. Why was she kidnapped if not for money? Is her grandfather’s Swiss/German background and the fact that his uncle was a key architect under the wing of Adolph Hitler during World War II giving this crime a political slant? To what degree are some of Hollywood’s most famous involved; especially those who had relatives in Europe during the war whose art collections were confiscated by the Nazi regime?

How do Victor Gastaldi, one of L.A.’s most prominent drug Czars, and Danny Ballantyne, a Chicago gangster, fit in?

What do thirteen un-cataloged paintings by a French Impressionist have to do with the outcome? Deadly Impressions asks hard questions about the past and the answers will dictate who lives and who doesn’t.

With Arney in tow, Chris and Chubbs make their way through the murky waters of Hollywood to find clues which don’t connect until the very end. The action travels to Cannes, France, Monaco and Tunisia with all roads leading back to L.A. as the conclusion smacks you in the face like a wet boxing glove in the dark. You won’t see this one coming, you can bet on that!

"This book surprised me. I felt it was going to be another simple mystery. WOW was I ever wrong. Mr. Johnson leads you subtly and carefully down a path of twists and turns. The intrigue and suspense is off the charts. While reading this book, I was certain I knew who dun-nit only to be proven wrong over and over. The writing style is terrific. The characters well defined and easy to understand. I also loved the history tie-in. This book is an easy read and perfect to curl up with. I know you'll enjoy it as much as I did."
--Melanie Adkins, Top Amazon Reviewer