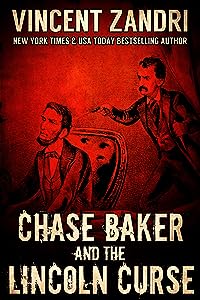 "Is the American Civil War really over?" Renaissance Man and Adventurer Chase Baker rarely visits home in upstate NY. But when his late dad's resting place is about to be interred to make way for a new road, he volunteers to operate the backhoe. It's the least he can do for a father who was always there to help Chase, the young man. But what he doesn't expect is a job offer by the local Albany Police Department to look into a missing elderly couple. Maybe Chase wants nothing more than to get back to New York City to work on his latest novel, but when the detective in charge happens to mention the couple lived in the same house as Clara Harris and Union Major Henry Rathbone, the young couple who accompanied President Abraham Lincoln in the Presidential Box on the night of his assassination back in 1865, he puts his plans on hold. What makes the job impossible to ignore (aside from the badly needed payday) is that Clara Harris's dress which is rumored to be soaked with Lincoln's blood, is also said to be stored inside a secret vault somewhere in the house. While Chase decides to take on the job of looking for the old couple, he can't help but put his treasure hunting tools to work in searching for the dress first. Standing in his way, however, is not only an egocentric and murderous Civil War Reenactment historian who believes he is the reincarnation of John Wilkes Booth, but more importantly, the dress itself. A dress that bears the blood of the Lincoln Curse. Filled with romantic suspense, real history and alternative history, cliffhangers, action, and paranormal dream-like events, the newest novella-length episode in the bestselling, award-winning Chase Baker "pulp fiction" series is sure to thrill. For fans of Dan Brown, Clive Cussler, JR Rain, and more."If you put Zandri and Dan Brown in a dark Cairo back alley, I'd put money on Zandri. He went to Cairo in the middle of the Arab Spring (against the explicit wishes of the U.S. State Department), gathered materials for the book while Tahrir Square rioted ... The Shroud Key is page-turning fun for popcorn munchers."--Ben Sobieck, CrimeFictionBook Blog"Zandri has brought back that wonderful ‘quest’ story ... THE SHROUD KEY is well worth every minute."--SUSPENSE MAGAZINE"Sensational...Masterful...Brilliant." --New York Post"The action never wanes." --Fort Lauderdale Sun-Sentinal"Gritty, fast-paced, lyrical and haunting." --Harlan Coben, bestselling author of Six Years"Tough, stylish, heartbreaking." --Don Winslow, bestselling author of Savages"Non-stop action." --I Love a Mystery"Vincent Zandri nails reader's attention." --Boston Herald