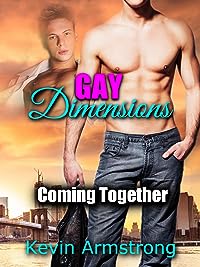 A sensuous, poignant, funny and touching story about two boys coming together. Christopher believes that their union is written in the stars but Raphael is more cautious, believing that what the gods give the gods can easily take away. In their final year of high school each of boys start to wonder whether or not they are gay after disastrous encounters with a couple of feisty girls.
Christopher who intends to become a professional author writes a graphic account of the hot action that he hopes will develop between himself and ultra-cute Raphael.
Excerpt:
“When the two boys arrived at Ghost Gum Swamp they stood looking at their reflections in the still water. Raphael was hoping that once again he would get to look at Christopher’s c***. Christopher was wondering what the future held. Would they take their clothes off? Should he make the first move?
Raphael picked up a pebble and cast it into the centre of the pool. As concentric ripples spread out on the surface of the lake the two boys turned to look at each other and then, at the same time, started to unbuckle their belts. They then took off their shirts and stepped out of their shorts. For a moment Raphael and Christopher stood in their underpants looking at each other. It was a moment that seemed like eternity. Now, for once, Raphael didn't feel embarrassed by the large bulge that his hard-on created in his underpants. Christopher had the same sort of bulge – it showed a lot of potential.”

Tragedy strikes out of the blue when Christopher is struck down by a brain aneurysm. Raphael works with brilliant young doctor Justin Sainsbury and his revolutionary ideas to try to save his boyfriend from the abyss.

ABOUT THE AUTHOR: Kevin Armstrong has worked extensively in theatre and film and television in Asia and the Land Down Under. He also teaches writing skills in universities and international schools. When he is not working he loves to spend time with his Burmese boy in Malaysia or Myanmar.

‘GAY DIMENSIONS: Coming Together’ will be of interest to gay boys just starting out, mature gay men, bi guys and even straight men and women.
The novella contains hot, steamy gay sex scenes and is not for the faint hearted. Any characters involved in sexual relationships are above the age of eighteen.
Approximately 44,000 words.
This novella-length work is the first book in the GAY DIMENSIONS series. However it is not a serial and may be read as a stand-alone story.