The End of an Era: Mad Men and the Ordeal of Civility 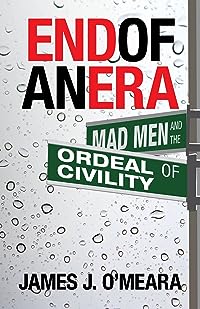 AMC’s Mad Men (2007–2015) was an instant hit, winning fifteen Golden Globes and four Emmys and “redefining television.” Already a slew of books have appeared to examine its cultural impact. Now comes The End of an Era: Mad Men and the Ordeal of Civility, bringing to the discussion a unique perspective: race realist and Traditionalist. Drawing in equal measure from Kevin MacDonald and René Guénon, and able to marshal a stunning array of pop culture reference points, James J. O’Meara -- himself a child of the ’60s and a product of America’s long-dead industrial heartland -- examines the hidden agendas and social implications of the Mad Man phenomenon. At its center is a bravura, two-part essay analyzing the disintegration of the Sterling Cooper Draper Pryce agency as symbolic reenactment of the archetypal struggle of the Aryan and the Judaic for control of Western civilization. From the culture-creating powers of the three-button suit, to the dissolution of the Aryan Ego in the hot tubs of Esalen, The End of An Era delivers one stunning insight after another. You’ll never watch a rerun of Mad Men the same way you did the first time.