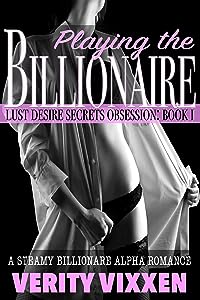 "Hi. I'm Alicia Mellor. I'm twenty-two, and I live in Sydney. This is my story of how I met a billionaire. It's not your usual rags-to-riches tale. For one, if you're expecting a wallflower, I'm afraid you're going to be disappointed. I'm a girl who's been around the block. I know what I like, and I don't take crap from anyone. Hawk Kinsey, eldest son of Australia's richest billionaire, might just be a typical alpha , but that's only if I can be sure who he really is. Join me won't you? I'm going to play this rich guy for all he's worth."

At least, that's what she tells the rich boys she dates. But Alicia has a secret, one that she keeps all to herself; she's not really a millionaire with dead parents and money tied up in Swiss bank accounts. She's really a poor girl from the outer suburbs of Sydney, and she uses her con to bleed rich men of their money.

Everything is going well until Alicia gets an unexpected invite to the party of Hawk Kinsey, the newly-returned eldest son of Australia's wealthiest billionaire tycoon . If Alicia can land Hawk, she'll never have to pull another con again. Problem is, Hawk's identity is secret, and no one knows who he is, or what he looks like.
Can Alicia discover the secret Hawk, and seduce him, all in one night?

Set in the beautiful city of Sydney, Australia, this novelette is the first part of a hot, new steamy romance series.

If you're tired of wilting violets and first-timers who are putty in the billionaire's hands, you'll find this book a refreshing take, blending mystery and romance. Alicia is street-smart and knows what she likes; she's just the kind of girl who can stand up to an arrogant billionaire!

Excerpt:
'Let's have a drink.' He goes over to one of the cupboards and opens it, and there is a fully stocked bar. 'I'm having scotch. What would you like?'
'Vodka. And juice.' If I'm drinking, I might as well do it properly.
I hear the chink of ice, and the pour of the spirits. He comes over with the glasses and hands me mine. I take a sip. He's made it strong, but the ice takes away the sting.
Before I can lower my glass, he lunges, finding my chin with his hand, and pulling it up to his waiting mouth.
His kiss is soft and warm, and tastes of the scotch he has just consumed, making my lips tingle with warmth. Our mouths sink against one another as though they were made for each other. The kiss stretches on and on, neither of us wanting to end it. I open my mouth a little, and his tongue darts in, exploring.
He moves closer, until his chest presses against mine. I can feel the strength of his body beneath his suit. I run a hand up his front. His abs are like steel, and his chest is hard and defined.
His hands slide down my body too, cupping my ass in firm hands. He pulls back suddenly. 'I don't know your name.'
'Alicia,' I say.
'Alicia,' he whispers.
I am about to ask him his name when his mouth reclaims mine, and the kiss is so passionate it drives all rational thought from my head. The alcohol fills my being, making the world soft and fuzzy, letting me give in to the base need my body so desires. 'I want you,' I whisper. 'I want you now.'
'I want you too,' he replies. He smells like the sea. His mouth continues to explore mine, as he reaches down and begins to gather up the fabric of my dress, lifting it up and over my hips. He slides his hands along the insides of my thighs, touching the silky material of my panties with a light pressure.
His fingers brush my --- and I groan against his mouth.