Message from Tomorrow and Other Stories: A Compilation of Science Fiction & Fantasy Novellas and Short Stories 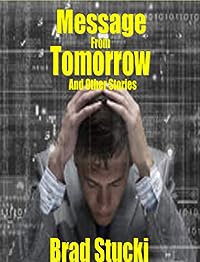 In the spirit of classic science fiction and fantasy, Message from Tomorrow and Other Stories contains eight fast-paced science fiction & fantasy novellas and short stories. Message from Tomorrow: Andre Manus sat in the dark basement of his gothic-style mansion at the metal desk where he’d spent the last 3 years working, sweating, and literally 'making' history. Mother Earth: In the midst of an intense alien invasion a fighter pilot finds he has an unexpected ally.Wisdom Test: A test that measures wisdom is the ultimate determiner of sentience. Passing guarantees termination.Adoption: This adoption is anything but ordinary.Cuspin Peace: Peace has broken out after a long interstellar war with the Cuspins. Captain Trace is finally going to get some R&R right after his last mission as part of the official peace delegation. Still, there's a nagging feeling in the back of his mind. Is it too good to be true? Hollow Canyon: Young Peter stood alone at the mouth of Hollow Canyon ready to face his test of manhood. His older brother had failed two years ago and had died. Hollow Canyon doesn't permit failure. Recruit: J. Vance Hamblin was the youngest to make Admiral in Fleet history. He was the best of the best – until he became an ‘insider’ and was pushed aside to keep him out of the way. Now he has to decide if he’s ever been fighting for the right side.Artisan: The Stranger's mission was to find and destroy the Artisan. He’d just missed him on several worlds which had been energy-siphoned to fuel the Artisan’s growing need for power. The Stranger knew he was no longer a match for what the Artisan had become. Still he had to try. The survival of all Creation was at stake.Give them a read!