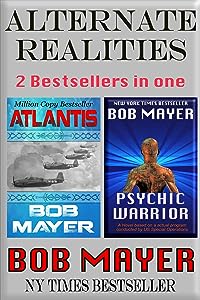 Two bestselling Military Science Fiction novels by a former Green Beret, West Point Graduate and NY Times Bestselling Author.“A background in Special Operations gives Mayer credibility.” Airpower Journal.“A masterpiece of technology and suspense.” Library Journal.Psychic Warrior takes warfare into the virtual plane through avatars and then reinserts the covert operatives into the real world. The results can be devastating. Mayer uses his real Military experience in the then classified Special Forces Trojan Warrior program, which was actually conducted, and writes a novel about the new frontier of warfare: the mind.The Russians sink the submarine USS Thresher in 1963 using their classified psychic project, but something goes awry and all are killed. All except one scientist who plans to take the project to a higher level. Decades later, the Russians unleash Chyort, also known as the ‘Devil’. Chyort is a cyborg that can project into the virtual world with almost limitless power and reassemble his avatar anywhere in real world to wreak havoc. As the Russian mafia steals 20 nuclear warheads to auction them to the highest bidder, Chyort implements his own plan of revenge. Sergeant Major Jimmy Dalton and a small team of US Green Berets who were originally trained in Trojan Warrior program are thrust into the Psychic Warrior program. The team, called Bright Gate, must battle Chyort on the virtual plane and take their own avatars into the real world. Their mission seems simple. Stop Chyort. If they fail? World War III..."“Spellbinding! Will keep you on the edge of your seat. Call it technothriller, call it science fiction, call it just terrific storytelling.” Terry Brooks, #1 NY Times Bestselling author of the Shannara series and Star Wars Phantom MenaceWhat if the Shadow that destroyed Atlantis 10,000 years ago, comes back to threaten our present world? A war beyond time. An enemy beyond space. A thriller beyond your wildest dreams. Three areas on the Earth’s surface defy explanation: the Bermuda Triangle, the Devil’s Sea of Japan, and a small region of Cambodia. Inside these realms, planes have disappeared, ships have vanished, and, in Cambodia, an entire civilization has been lost leaving behind Angkor Wat. In 1945, Training Flight 19 disappears in the Bermuda Triangle. In 1963, the USS Thresher, a nuclear submarine, is lost under unusual circumstances, part of a secret government investigation into mysterious gates. Near the end of of the Vietnam War, Green Beret Eric Dane led a team of operatives deep into Cambodia and encountered a strange fog near the legendary city of Angkor Kol Ker. His entire team disappears, attacked by strange creatures out of the fog. Only Dane survives to return.Now a plane goes down. In the same area Dane lost his team. He’s called back. To find out who is the darkness behind these gates to our planet. What does this Shadow force want? It is a threat that will take on the world’s greatest military forces and defeat them. A power that will overwhelm our science and technology. A merciless enemy that will lead Dane—and the whole planet—into the final desperate battle for survival.If you enjoyed LOST, you’ll love this book and be amazed at the similarities in concept (although this book was published before Lost).