Of Wisdom and Valor: The Art of War. The Path of Peace. (The Windflower Saga Book 2) 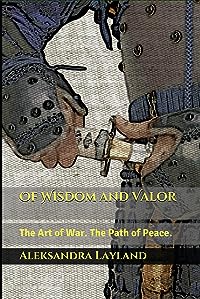 "Of Wisdom and Valor" is the main content of the "Wisdom and Valor Treasury," which received a Silver Medal for Fantasy in the 2017 Florida Authors and Publishers Association President's Book Awards. Part II of The Windflower Saga epic romantic fantasy trilogy, "Of Wisdom and Valor" is set in a time not now and in a world not of our own. Generations have passed since the flourishing of the Kingdom of Kimbria under its first Golden Age. Corruption is rampant and the common people suffer under poor governance. Finally, they cry out for a monarch to replace the greedy Royal Council. Acting as Regent, the Council elects Lady Keridwen, the young Duchess of Ansgar, as the new Queen and orders her to marry a fearsome mercenary warlord, Lord Leofric. He fetches her from the remote convent where she’s lived for 20 years, but he takes her to his distant castle, not to the Palace so she can take the throne. The Royal Council has no intention that she will ever rule. What ensues is a heroic battle against greed, evil, and conspiracy, with the lives and freedom of the Kimbrian people hanging in the balance.