The Physics and Philosophy of the Bible: How Relativity, Quantum Physics, Plato, and History Meld with Biblical Theology to Show That God Exists and That ... Live Forever (The Inevitable Truth Book 1) 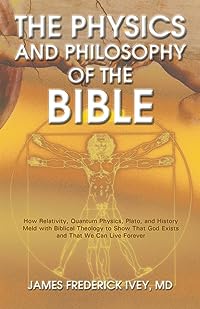 The Physics and Philosophy of the Bible is a book on Christian apologetics that supports the premise that science, Platonic philosophy and history endorse the validity of Christianity. An analysis of the claims of science shows that this discipline is just as much about faith and belief (vs. fact) as is Christian doctrine. Quantum mechanics has rendered atheism obsolete and has provided us with insights concerning the possible nature and origin of the Biblical God. Einstein's Special Theory of Relativity has virtually proved that we all live forever in some kind of timeless state. Quantum observation, a consequence of quantum physics, has provided us with strong evidence that the true God is He of the Bible.

Augustine of Hippo said that he probably would never have been converted were it not for Plato.

Other theses entertained in this volume are that mind is primary in our world, which is the thought of God; that God emanates from The Truth, synonymous with goodness and all that is good for cognitive individuals; that faith is much more than blind belief in Him; and that the history of the Jews provides us with powerful evidence that they are the chosen people of the true God. Christianity is unique among religions in terms of reason, logic, and common sense.

Here is an example of the writing to be found in my book: "Quantum observation is heavily involved with the concept of form and substance, something that greatly interested Plato. In our world, we can discern two aspects of a material object: substance, the "stuff" of which it is composed, and form, which is its shape. These two characteristics are always connected on the human level of size; according to our physical senses, any separation of them is ridiculous. On the bizarre quantum level, however, elemental entities can exist as form alone or as substance alone. When these are in the state of form, they are waves, and, when they assume the mode of substance, they exist as discrete packets--ultimately, of energy. These are distinct bodies of substance that we call quanta.

I am privileged to have received an endorsement of my work from Charles Taliaferro, Chair, Department of Philosophy, St. Olaf College; Editor-in-Chief, Open Theology. It reads as follows: "Because medical doctors or physicians have made vital contributions to philosophy, from Maimonides, Avicenna, and John Locke in the history of philosophy to Raymond Tallis today, it should not surprise us to see Dr. James Frederick Ivey's superb contribution to our philosophical reflection on the bearing of current physics on Biblical faith. Perhaps it takes a person well trained in the application of science in medicine to see the ways in which the application of science, especially modern physics, quantum mechanics, and relativity have important applications in our thinking about God, the Bible, and Judeo-Christianity. The terrain is not unexplored by philosophers, theologians, and popular writers, but it is rare to see the kind of engaging clarity, breadth, and conscientious, mature reflection to be found in Ivey's book." I have a second professorial endorsement that reads thus: "In his book, The Physics and Philosophy of the Bible, Dr. James Ivey, although a physician, has done his homework in both the physical sciences and philosophy. He argues that modern physics, relativity and quantum mechanics, strongly infer the existence of God. He concludes that the historical man, Jesus of Nazareth, was not a lunatic or a liar, but truly God. He submits that Biblical Christianity has all the truth in it and is radically different from all other faiths. His book is a must read for those who have problems with science versus theology." David A. Kaufmann, Ph.D., Past Secretary, Creation Research Society and Professor of Applied Physiology (Retired), University of Florida, Gainesville, FL.