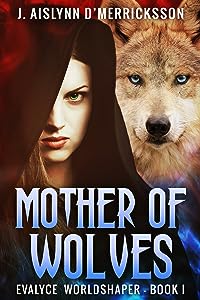 De Sikkari, a world full of magick and wonder and blended technology. Floating skycities, supported by lucavite, soar far above the continents and oceans. It is a world where creatures of myth and legend roam freely. A world fraught with an unknown danger, for the magick binding the Nagali Al'dhumarna in his confinement upon the Isle of Whispers has begun to fail. It is 2013, the Year of the Golden Hart, a year of awakening and change, especially for Kalla kyl’Solidor, a mage of Cryshal Kanlon. Kalla has gone to find a magister, the guardians who serve as protectors and energy sources for their magi. Kalla finds more than she bargained for when the skycity she is visiting comes under attack by fire wyvern, dragon-kin who normally shun humans and keep to themselves. In the aftermath of the battle Kalla and her magister find a wounded wyvern. Rather than allow the creature to be slaughtered, Kalla heals it, learning, in the process, that the wyvern had been drugged and set to attack. A fire-scrying reveals that it wasn’t an isolated event. All across De Sikkari, dragon-kin and other creatures had been enslaved and set against city and skycity alike. The scrying sets Kalla and her magister on a journey which will profoundly change them in ways they could never imagine.


***This is part of a serialized larger book. They are not prequel/sequels, but were intended to be one whole book. Due to repeat requests, they are being released in smaller sections first. The next two parts will be out very soon, as they are already complete!