The Dark Side of Nightfall (Book One): Tales From Nightfall Trilogy 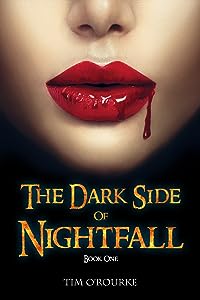 Nightfall is a town where young lovers like to go to be alone. But unlike most towns, Nightfall has a dark side...Tale One...When Andrew Spencer stepped out of the rain and into Lara's life, she believed at last she could put her dark and secret past behind her. But on her wedding night, Lara knows she can no longer keep her secrets from her new husband.Lara is still in love with another - a man who lives in the shadows but not only in the shadows of her past but of the night too. Setting out into the mountains for a secluded honeymooner's cottage, Lara's past finally catches up with her.Separated from Andrew in a freak storm, Lara finds herself alone in the cottage with another - someone who reawakens those dark and forbidden secrets that haunt her.Tale Two... When Celia Jones decides to leave her husband, she makes for a remote village called Nightfall where she rents a cottage on a desolate mountainside. Here she has arranged to meet her lover.With a bag of stolen money and paranoid that she is being hunted by the police, Celia reaches the cottage, but when a stranger arrives, her escape doesn't go according to plan. Celia discovers a daring and darker side that she didn't know existed until finding herself in the arms of the stranger who has arrived in Nightfall.'The Dark Side of Nightfall' is the perfect remedy for lovers of paranormal romance stories who are looking for something dark, racy and mysterious to sink their claws into. *This is a New Adult Novel recommended for mature readers due to adult content*