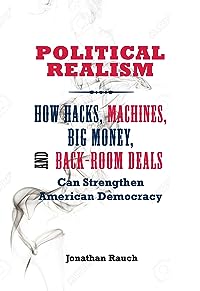 Why did politics once work? And why don't they work today? Despite decades of reform, government is more dysfunctional than ever, the country is more polarized, and special interests have more power to veto reform. What if idealistic reform itself is a culprit?In Political Realism, Jonathan Rauch argues that well-meaning efforts to stem corruption and increase participation have stripped political leaders and organizations of the tools they need to forge compromises and make them stick. Fortunately, he argues, much of the damage can be undone by rediscovering political realism. Instead of trying to drive private money away out of politics, how about channeling it to strengthen parties and leaders? Instead of doubling down on direct democracy, how about giving political professionals more influence over candidate nominations? Rauch shows how a new generation of realist thinkers is using time-tested truths about politics and government to build reforms for our time.Rich with contrarian insights and fresh thinking, Political Realism is an eye-opening challenge to today's conventional wisdom about what ails American government and politics.