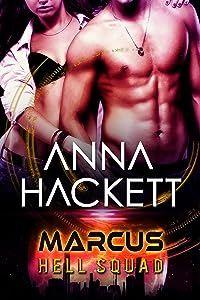 For a limited time, you can get the latest Phoenix Adventures novella, On a Cyborg Planet, free. Visit here to find out more > bit.ly/annahackettbooks (paste into your browser)In the aftermath of a deadly alien invasion, a band of survivors fights on...In a world gone to hell, Elle Milton--once the darling of the Sydney social scene--has carved a role for herself as the communications officer for the toughest commando team fighting for humanity's survival--Hell Squad. It's her chance to make a difference and make up for horrible past mistakes...despite the fact that its battle-hardened commander never wanted her on his team.When Hell Squad is tasked with destroying a strategic alien facility, Elle knows they need her skills in the field. But first she must go head to head with Marcus Steele and convince him she won't be a liability.Marcus Steele is a warrior through and through. He fights to protect the innocent and give the human race a chance to survive. And that includes the beautiful, gutsy Elle who twists him up inside with a single look. The last thing he wants is to take her into a warzone, but soon they are thrown together battling both the alien invaders and their overwhelming attraction. And Marcus will learn just how much he'll sacrifice to keep her safe.Note to readers: This post apocalyptic sci fi romance contains a lot of action (think invading aliens, explosions and gunfights), tough warriors (the sexy, battle-hardened soldiers of Hell Squad) and a steamy romance (lots of sexy times between a gutsy survivor and a tough, scarred warrior). So if you like it fast, and gritty, and sexy, this is for you!Includes preview of Book 2 of the Hell Squad, Cruz.__________________________________________________More Hell Squad action and adventure coming soon!MarcusCruz - April 2015Gabe - May 2015Reed - June 2015What readers are saying about the Anna Hackett's Science Fiction Romance:At Star's End - One of Library Journal's Best E-Original Romances for 2014The Phoenix Adventures - SFR Galaxy Award winner for Most Fun New SeriesBeneath a Trojan Moon - SFR Galaxy Award winner The Anomaly Series - An Action Adventure Romance Bestseller "At Star's End is a fun, thrill ride of a science fiction romance." - Mstcat, Goodreads review"At Star's End by Anna Hackett sizzles with tension, action and danger." - Dii, Top 500 Amazon reviewer"A wonderfully written space adventure full of treasure hunts, history, excellent world building, fun characters, assassin fighters and intriguing mystery." - Corrinthia, Amazon review of In the Devil's Nebula"An action-packed sci-fi adventure with some smoking hot sexy times, I highly recommend On a Rogue Planet." - KatieF, Amazon Review"On a Rogue Planet is a page turner." - Cubbieberry, Amazon Review"High action and adventure surrounding an impossible treasure hunt kept me reading until late in the night." - Jen, That's What I'm Talking About, review of Beyond Galaxy's EdgeAbout Anna: I'm passionate about all things action romance. I love stories that combine the thrill of falling in love with the excitement of action, danger and adventure. I write about people overcoming unbeatable odds and achieving seemingly impossible goals. I like to believe it's possible for all of us to do the same.