That Old Black Magic (The Boys of Raven Cove Book 1) 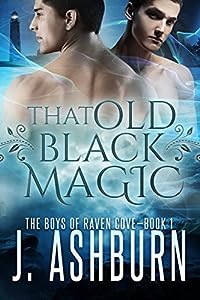 Julian, the leader of the Blue Light coven, adores his boyfriend Chris and loves training him the ways of magic and the circle that binds them and all of their friends.
Chris wants nothing more than to be a good student, help others and ascend to high priest like his partner, he just hasn't discovered what is gift power is yet. Why has it eluded him and not the others?

All seemed right in Raven Cove until a dark secret from Julian's past makes its way back into town, disrupting the coven and exposing hidden desires, buried lies and weakening the bond of the coven and all of its members.

The lovers will soon find themselves in a struggle with powers beyond their control and a dark energy that hungers for lust, power and the one thing that Julian will protect with his very life.

The sleepy town of Raven Cove is about to wake up.

That Old Black Magic is book 1 of The Boys of Raven Cove series.