KIM PHILBY: Our Man in Moscow 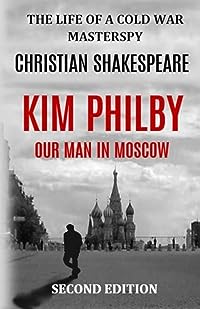 Your best friend is a traitor.

That is what I thought when I researched this work. I try to reach new depths, to get to the wider part of the story to give you the thrills you as the reader expect from a story.

So here I am writing another book.

I’ll be truthful this one is going to shock you. It will make you think uncomfortably about your friends – and see them in a new light. After reading this I doubt if you will ever trust anyone again. Every time you go out, every time you meet people all you will see is dishonesty.

When someone works in the world of secret espionage they expect it first-hand. The lies and the duplicity committed by a man with no conscience to the consequences of his actions. Someone who simply holds a higher regard for an idea than for human life holds pure evil rationalised as nobility. Many friends simply refuse to believe it or could not say anything without the risk of losing everything.
Treachery was part and parcel in the tense days of the Cold War where nobody can ever be trusted unless they were of the right class, the right accent and of the right connections.

But that is no guarantee…

In January of 1963, in the age of atomic bombs, the Beatles, and flower power, a man slips out of Beirut and flees to the Soviet Union. For almost 30 years Kim Philby, senior intelligence officer unscrupulously spied for Moscow, wilfully leaking sensitive documents while betraying his friends, colleagues, loved ones and ultimately his country.

For over 10 years he was close to the top of the intelligence game, passing intense secrets, protecting his friends and ensuring the Soviet Union received high level information on state secrets. Kim Philby was both a charmer and a calculator, sending many to their deaths through his unique position. This spy, one of the most damaging of the Cold War, ensured the balance remained between east and west yet his masters never really trusted him.

The scale of the hypocrisy is hard to imagine, scary for you and I to appreciate just how one man could operate with a completely split personality to affect the outcome that could potentially have tipped us all into a nuclear World War III. A man just like Kim Philby.

Dare you read what happened to this traitor? Download a sample or buy it today.

See you on the other side.