100 Things That Make Us Angry 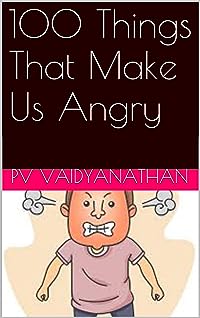 Anger is one of the commonest of the negative emotions that we experience, and no human being is exempt from anger. The degree varies, the timing varies, the duration varies, the causes for anger vary, the triggers vary, but eventually, anger gets to everyone, and it is almost impossible to go through life without feeling angry about someone or something.
But for some of us, anger becomes a major problem, a handicap. People who have an anger problem tend to erupt when presented with the right triggers, which might seem silly or stupid to those around. “Why is this person getting so angry? What is the need? Why can’t he/she just ignore this silly problem? Is what most people around tend to say. But for the person who gets angry, his/her anger is very real, very legitimate, and very much justified. Try as he/she might, the angry person just cannot stop getting triggered into angry outbursts. Anger becomes a problem, and causes much concern and stress, both for the person who is prone to angry outbursts and to those around him/her. In calmer moments, the person who erupted in anger himself/herself feels silly, guilty, ashamed, and even apologizes to the victim of his/her anger. He/she promises not to get angry again, to try and get a grip on themselves, to be patient, to try and remain cool. But when the suitable trigger or situation comes up again, there is an action replay. The angry person loses control and behaves like a robot whose controls are being manipulated by someone else. He or she seems to have absolutely no control on what they say or do. They say and do things which they would never do in their saner moments, leaving behind them a trail of anger, hurt, fear, hatred, dislike and embarrassment. People expect the person with an anger problem to get a grip on himself, but that never seems to happen. A lot of marriages and relationships turn sour, a lot of jobs are lost and there is a tremendous loss of peace and harmony, due to anger.
In this book, I have listed 100 common situations that produce anger, in most of us. The purpose of this book is to make us aware that, at one level, we are all similar, and we have the same or similar set of issues in life. Knowing these common conditions which trigger anger in us will help us to get a grip on ourselves and be alert and aware and be better prepared to tackle our anger.
The anger might be against ourselves or against someone else. Anger against ourselves is better than against someone else, as it is easier to rectify the damage done. Also, anger is not as bad as apathy or being depressed, for anger has its own energy, and if transformed, it could result in a great revolution in us and those around us. It is important only to recognize why we get angry, become alert, and try and stop the anger at the point it gets triggered and before it starts manifesting itself. Once we can do this, we have a great source of energy within us, which can be put to tremendous creative use.