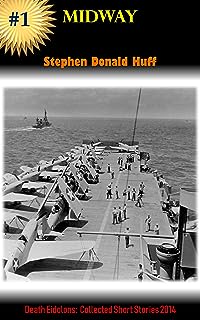 One of the most pivotal waterborne engagements in history would not be fought ship-to-ship in the traditional fashion of naval warfare, a brutal duel between massive battleships. This titanic contest would be decided without either commander sighting the other, for victory would ultimately be claimed in the skies, aircraft to aircraft. Its outcome directly determined the future of the individual sailor and aviator, but it also indirectly decided the fates of their entire homelands, as well. For the combatants, Midway was not merely an isolated battle in the larger conflict, rather it would decide the war entirely and the fate of the world thereafter.

Poised between barbarity and civilization, this key historical conflict determined the fate of its participants in a single engagement. Will humankind ever fully benefit from the sacrifices made that fateful day in the skies surrounding the tiny Pacific Island called Midway? An insightful short story.