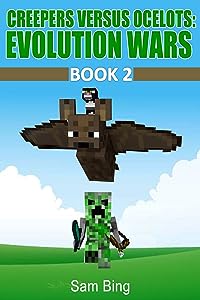 King Creeps the Terrible is building an army of evolved warriors deep inside his mountain lair, and he will stop at nothing until every player and ocelot is defeated! When a team of assassins goes after Steve, Goldie wants to protect him. But even the largest and sharpest-toothed ocelot in Westland needs help against Major Boom and his evolved creepers.

Just when all hope seems lost, Goldie meets an ancient breed of cats known as the saber-toothed jaguars. Queen Nihi and the jaguars are three times bigger than Goldie, and once hunted creepers for food. Goldie must prove his bravery to the jaguars by challenging a 'terror bird' in a dangerous contest called the Chicken Game.

Join Goldie on his quest as he rides a giant bat, battles explosive creepers, and sits down to a royal island feast with Queen Nihi. Find out why creepers are afraid of ocelots and carry music disks around with them. Hint: it all comes down to one word... evolution!

This story contains no cursing, kissing, or graphic violence. Nothing in this story is approved, endorsed, associated, or connected with Mojang / Notch. Minecraft is the property of Minecraft ®/TM & © 2009-2013 Mojang / Notch.