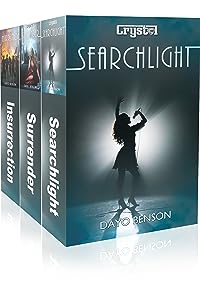 A collection of the first three books in the dazzling Crystal Series, from Amazon Bestselling Author Dayo Benson.

Follow Crystal as she battles for freedom from celebrity cult, the S.O.T., and forms a team of ex-S.O.T. members, including a male model and the lead singer of a boyband, to bring the S.O.T. down. Will they succeed or are they too spoiled to pay the price? Expect glamor and nail-biting tension.

A heart-rending tragedy. A passionate love. A firm resolution.

Ambition
For as long as Crystal remembers, she has wanted to be a singer.
For as long as she remembers, her parents have feared the SOT, a celebrity cult that will make you famous, but destroy you in the process.
When Luke, leader of the SOT, sets his sights on Crystal will she have the courage to stand her ground, or will she give in?

Destruction
After the SOT deals a deadly blow, Crystal has no choice but to obey their orders to sign up for Searchlight. Searchlight is the biggest talent show on TV. With the SOT’s backing, Crystal could win, but is she willing to pay the price? When she unexpectedly finds love, she is afraid to pursue it for fear that darkly handsome Juda could become an SOT target too.
At Searchlight, her dreams and nightmares collide. According to Juda, it’s the darkest places that need light the most, but the SOT is much darker than Crystal imagined.

Heartbreak
Not everything is what it seems to be, and not everyone is who they say they are. Crystal is tough, but she’s only human. There’s only so much heartache and betrayal one girl can take.
Then she is tested and forced to make a choice.
It’s a choice between light and darkness.
Good and evil.
Faith and despair.
But choosing God could mean choosing death.

The SOT is back, and this time they mean business! Lexi escaped. Will her daughter, Crystal?

Everyone has a limit…
…and Crystal is steadily getting closer to hers. She thought she could escape the SOT, but now they have her and there seems to be no way out. Some people think she has everything, but she knows she has nothing. Is she ever going to break free? And is the mysterious Juda a friend or foe?

Everyone is scared of something…
…and fear is the worst enemy of all. Crystal wants to hold on, but her fears enable the SOT to drag her to darker depths than she ever thought possible; depths from which she must claw her way back if she is ever going to regain her freedom.

The pressure is on, and Crystal must either fight or be broken. It all comes down to one question: Who will she surrender to?

The Determination of a Victim.
Crystal has survived eighteen months of trauma at the hands of the SOT. She now has two options: she can either fade into obscurity, or fight. She chooses to fight—along with her team of unlikely alliances. But as their plans come together, doubts are never far away. Can she really trust her team, or will they give up at the first hurdle? And, are they on a suicide mission, or can they really bring down the SOT?

Crystal will stop at nothing to achieve her aim, but she must pay a high price, and decide whether the cost is worth it.

Fans of the popular Beauty for Ashes Series, by the same author, will love this new series, which focuses on Crystal, supermodel Lexi Washington’s daughter.