Beyond the Wire: A Soldier's Perspective on the Iraq War 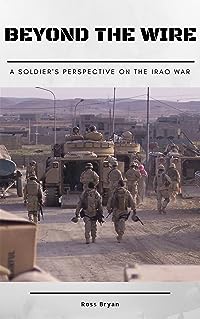 Squinting from a one-two punch of exhaustion and the eerie faded-brass hue of a desert sun that doesn't take breaks and never seems to want to, I’m trying to decide just how in the hell I ended up here. Here, being Iraq. Cavalry Scout. In the Army for that matter. Perhaps if I thought long and hard enough I could remember. I knew for damn sure that I had no shortage of time to work it out.

My journey had started 6,250 miles to the west in a crumbling Ohio mill town called Ashtabula. I had spent the better part of a year at a 3rd shift job in a factory on the far end of town, trying not to lose myself in the mullets and meth of the American Midwest. Then came 9/11. The images of those airplanes slamming into the NYC skyline like lawn darts playing on a constant loop on CNN. The attack had leant me a sense of purpose; I enlisted in the Army. But that wasn't it, there had been something more. Suddenly I remembered. It was the dune buggy. The video from the Army recruiting station had featured a couple of fearless, clean-cut GIs riding in a dune buggy. Come to find out, there weren't any dune buggies in Iraq. Your standard US Army bait-and-switch; join the Army, see the world. Just not any part you're gonna want to remember.

Dune buggy or not, here I was. As far from Ashtabula as I could get, squinting in the dust and that godforsaken insane-colored sun; you know you're not in Kansas anymore when the sun doesn't even look right. All of it seemed to be drawing together into some kind of destiny; and before I ever saw Ohio again, before I got the chance to comprehend the paradise that Ashtabula really had been, there was Iraq. There was an eternity of gunfire and explosions and heat and blood and steel. Iraq was hell, and that was exactly where I was going.

Note from author: This book was previously released under a different title; I changed it because I like this one better.